-All of the performer/choreographers Dave Herigstad, Marie Putko, Jordan Rosin and Yokko achieve equally unique and interesting work. Each performer was very emotionally connected and though I may not have always understood their intentions, I felt sure each dancer was fully committed in the moment of their truth.- (nytheatre now by Lynn Marie Macy)

-Melody Erfani's play 97 Orchard St, created with writers Laura Jo Hess and Alexander Koo, and composer J.P. Makowski, imagines the history of cultural change in the Lower East Side as a sort of balletic musical chairs. Erfani's direction of the piece focuses on what this type of change might look like rather than trying to explain by using the common discourse. It's most effective because it transcends the noise that is heard daily on blogs and newspapers about neighborhoods being culturally destroyed. 97 Orchard Street is now better known as the address of the Lower East Side Tenement Museum.- (Theatre is Easy) by Jason Rost,
June 19, 2014

-In this heartfelt examination and meditation on cultural and familial expectation, self-doubt and personal identity, Yokko grounds herself in her story as much as she does in the present moment, and her commitment to both is admirable. With or without hair, Baldy is a thing of wonder.- (nytheatre now) by Amy Lee Pearsall 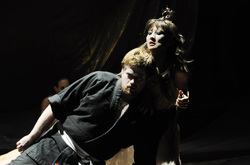 -Another great performance is offered by Yokko as the Mother. Once she entered carried on a back: singing, unblinking. I remeber her shoulders rolling coquettishly as she exited from a confrontation. Her every choice had an air of specifivity and mystery.- (NY Theatre)- Mitchell Conway 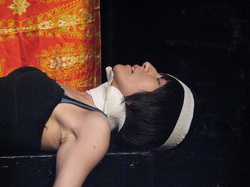 -Baldy is a tale of spiritual triumph and an intriguing view of Japanese social mores. When not portraying snapshopts of her family and her culture. With so many storytelling decices going on Yokko takes the risk of losing a coherent story. Her risk pays off. What we get is a textured and compelling portrait of a girl overcoming doubt, fear and disease, as she becomes a woman of hope, strength and presence. Yokko has nurtured her seeds of beauty, they rooted, and in this unforgettable work of theatre, they have blossomed.- (nytheatre.com)Jack Hanley 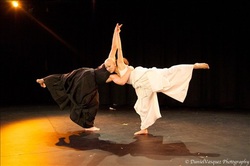 -It was vivid melding of art and anthropology.

“The event went really well. We engaged with the audience,” said Yoshiko
(Yokko) Usami. Usami contorted herself through two martial-arts inspired dance routines. She allowed her nimble body to do all the talking.
“It’s without speaking — it’s all movement,” she said.
(New York Daily News) Irving DeJohn

-This is the essence of multiculturalism. Something new and strong comes from tolerance and sharing a community.How We Are Connected has as its objective to help discover the connection between us. It was amazing.
-The individual performances were all exceptional and represented high talent. The mix made it even more interesting.
-The selection of talent was very good. Each person had an obvious deep commitment to what they are pursuing in their own performing art.The How We Are Connected program was Inspired by National Geographic’s, The Genographic Project, an ongoing anthropology study that charts human migrations throughout the world. (OurLIC Review) 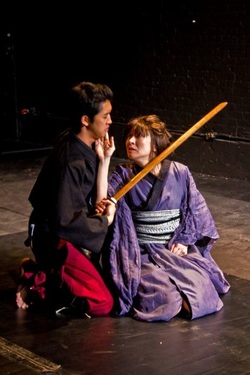 -Butoh Electra was purely Fringe—an intriguing concept pushed to the edge of a possibility, if not quite over the top of it. Billed as a “workshop production,” one hopes the newly-formedUme Group will continue developing this martial-arts/butoh-tinged amorality tale set infeudal  Japan, but based on Greek mythology. (Stage Rush) - Nicole Gluckstern

-There are a few gems in Butoh Electra, Yokko as The Mother gives a strong performance. (Artsy Farty SHow on WBAI 99.5FM)

-Rosin's successful synthesis of classical Greek and Japanese traditions enriches the myth at the piece's core, as do commanding, physically impressive performances from the Ume Group. (Village Voice) - C.C.Kellogg

I was interviewd by Jon Campbell from Albany Student Press after the Production, Antigone in which I played Tiresias. He wrote about my journey-how I came here, the USA from Japan. 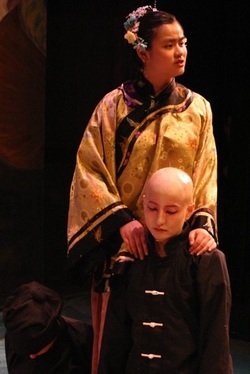 "Producing a new play has to land high on a theater’s risk list. The UO theater department’s Second Stage production makes that leap with Lotus Lessons, a piece that combines the tale of an adopted girl with the history of Chinese women in the U.S. "(Eugene Weekly) - Suzi Steffen

"Martin Fogarty played the "dan" role of the White Ghost. In Chinese opera, as in Elizabethan and ancient Greek theater, women's roles were played by men. Fogerty was an imposing diva, all 6-feet-plus of him in gorgeous flowing costume and extreme operatic makeup. His performance of Yokko Usami's choreography was convincing" (The Register Guard, Euegen, OR)-Richard Leinaweaver